For those of you that collect vintage Exquisite jewellery from WAP Watson, may have discovered that many pieces are unsigned.
The company was in production (except the Second World War years) from 1914 until around 1979.
It may surprise you that before 1953 all jewellery was unsigned. Sometime between 1953 and the end of the fifties, they started to add a plaque with the name "Exquisite" in script. 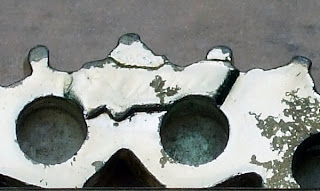 I was lucky to talk to an old employee of W A P Watson who was one of the people who made the jewellery's molds and invented many of the finishes. He worked for them until 1953 and in that time none of the jewellery had a signature. They were sewn onto a fabric pad and boxed. Both of these were named with the trade mark Exquisite.
Up until 1955, the jewelers would patent their designs. So you may see "Pat pend" (patent pending) or "Des Pat no" or "Des Reg" (design registered) on some pieces of vintage jewellery and a number. Copying other company designs was a widespread practice (and still is today). Many designers would submit their jewellery design to be patented. This process would often take several months. Thus the Pat Pend signature. 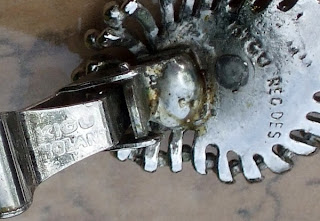 However in 1955 with the changes to the US Copy Right law, because of Trifari winning a historic case against the company Coro. This established that jewellery designs were a work of art. They were then able to use the copy right symbol. The symbol is the small c in a circle (© ) UK soon followed and most jewellery was signed 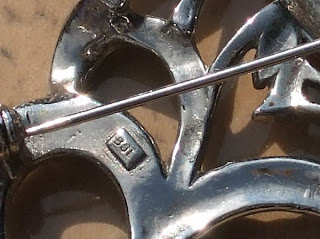 I have to mention that the first plaques with the script signature of Exquisite did not stand the test of time and can be worn and almost indistinguishable.

So if a piece of vintage jewellery has Pat Pend or a reference to patent then it is probably dating pre 1955. (there are a few exceptions to this) but in general use this rule. 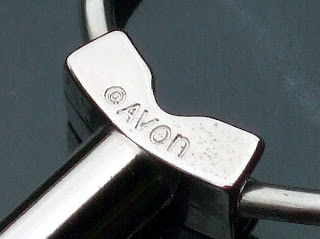 Avon key ring showing the © sign
Back to Exquisite - how to identify non signed jewellery and there are over 40 years worth!

It will match signed pieces. The Scottish luck heather brooches is one range that this is easy to do this with. Also an unsigned pair of earrings will match a signed brooch. In my experience brooches are signed more often. Necklaces are usually unsigned but have the characteristic "bow" tag. Earrings are usually signed and also rings underneath. Bracelets are rare anyway and may be signed or unsigned. 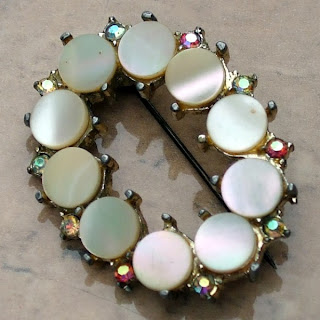 Love this Exquisite brooch - as can be found with various type of Exquisite signatures and different thickness of the MOP pieces. This one is pre copy right vintage jewellery


It would be ideal if after 1955(ish) we could say the jewellery was all signed but unfortunately this was not the case.

I can now attribute some souvenir jewellery with a plaque to Exquisite because of their early souvenir spoons. But they produced a large range of scatter pins for the 1951 exhibition in London. These I can guess but not confirm due to the large number that can still be found in Solihull and Birmingham. So my search goes on for news clippings, adverts and hopefully jewellery brochures. If you have any I would be very interested. 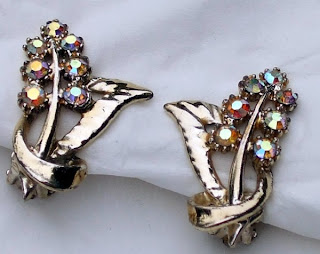 Now are the above vintage clip earrings from Exquisite, Hollywood or Jewelcraft?
Posted by Sue at Tuesday, August 03, 2010