Okay so you either like them or thing they are grouse! That is Scottish jewellery Ptarmigan or grouse foot brooches! 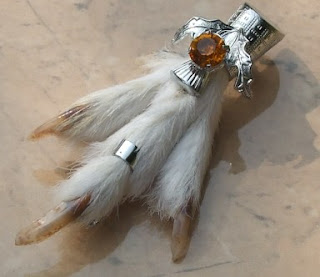 Since the Victorian era when Scottish jewellery became popular. The birds foot of the Ptarmigan has been used in the jewellery industry, to produce claw brooches.
Originally worn on kilts, shawls and cloaks - it was prized for good luck especially when on a game hunting trip. Still very collectible vintage jewellery today.
Grouse bird foot brooches can be found in both silver and costume. The silver ones are hall marked and were made by the Ward brothers. (Ideal for dating with the hallmark) The brothers were originally producing jewellery in Scotland but also opened another factory in Birmingham's Jewellery Quarter, as the popularity was such for their Scottish and other jewellery.
They also produced costume grouse pins under the Mizpah range. 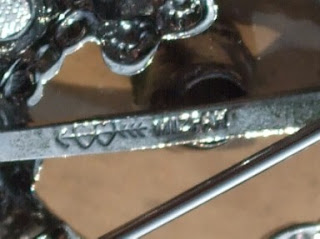 The signature is above with two hearts and an arrow through. Not signed Mizpah on some pieces. Made by Quarrier Ward and the Ward Brothers - the designs now owned by Miracle.
Some brooches are unsigned and may be displayed on just a card.

The real feet are decorated with Cairngorm stones usually of glass but some are the real gemstone. They can also be found with amethyst coloured stones. Again some of the stones are real amethyst and usually on the silver versions.
Earlier brooches are made with very skinny feet and later versions being fatter. I think the later ones are not real feet but manufactured. Different finishes are also available with either smooth silver or silver tone to a pattern on the jewellery. Still made today by Miracle as still very popular Scottish souvenirs. 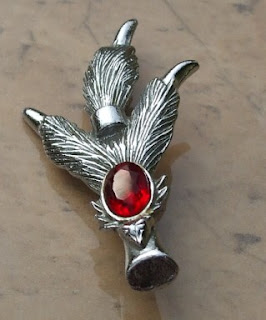 Above is a silver ptarmigan grouse foot brooch.

Also available in just silver tone if you do not want a real foot!
Posted by Sue at Saturday, May 21, 2011