Research on Jewellery marks and trademarks


Below is the research we have done in the UK and of international jewellery marks, signatures and trademarks. Looking at the information on the designer companies old and modern that made or still make designer costume jewellery in the UK, USA, US (America), France, West Germany, Italy, Hong Kong, Japan, China, Switzerland, Bohemia, New Zealand, Canada, Czechoslovakia, Africa, Thailand and Austria. We have included vintage fashion jewellery marks history, designer trademarks and patents as far as possible. Taking the stamps from the back of jewellery, boxes, cards and hangtag information available. This alphabetical list of costume jewellery signatures will be added to regularly.
We have moved this from our old website and have published it now on our longstanding blog. Unfortunately, the photographs are missing. So have a little patience whilst we locate and re-photograph many of the signatures, tags and cards.

Avon - This US Company started around the 1880s. A door to door bookseller hit on the idea to also sell fragrances - and the company was in business. First called The California Perfume company. In 1939 the company became Avon Products. In 1965 the company produced its first Avon jewellery. So this is when Avon started to make jewellery. They were pieces that also had solid perfume compartments. The first ones were - bow-shaped brooch/pendant, cameo pin, solid perfume locket, owl, leaf. As well as rings, tie tack (Bue Blaze), pillbox and wishing charm necklace. For those interested - we have a collection of Avon's perfume brooches in our shop.

Many other pieces followed and they still produce jewellery today. Famous designers for Avon have been: Kenneth J Lane, Elizabeth Taylor, Coreen Simpson, Jose Barrera, Celia Feraud, Shaill Jhaveri with many collections including the collectable Egyptian Revival. Signature AVON with or without the ©. The initials some times seen are not the designer but an internal code used for the company who manufactured the piece. Eg SH, NR, BW, SP, WN, MR, etc.

A and Z Chain Company - 1905 - its amalgamation in about the mid-1970s into the Allison Reed company. Initially producing fine and plated (or gold filled as the American way of reference this) jewellery including chains. Based in the USA. B David - 1945 - 1993, US company who produced some very pretty fake jewellery. Signed B David without the copyright symbol.  Baker Oliver - (1859 - 1939) Produced fine silver buckle designs in hammered silver with strong entrelac or curled motif patterns. Usually embellished with semi-precious stones of a cabochon. He worked for Liberty. Balleny John - Victorian of Birmingham. Showed brooches in the 1862 exhibition.  Barcs - an Australian company that produced jewellery at least 1980s up to the present day, maybe earlier as unknown? Brooches, necklaces and clip-on earrings are still available. Signed BARCS in capitals with usually a design number. Possible link with Monet, as a brooch was almost identical except colours to a Monet piece. Barclay - 1945 - 1957, US company who signed their jewellery "Barclay" ** not to be confused with McClelland Barclay pieces as they are separate companies. Barclay McClelland - 1935 - 1943, a famous graphic designer who was unfortunately killed in World War Two. The Rice- Weiner company produced his pieces, because of the beauty and his tragic early death. His jewellery now commands high prices. Beau/Beaucraft - the late 1940s to 2004. Produced high-class sterling silver jewellery based in the US. On the par with Coro for collectability. Beau Jewels - 1950s - 1970s, US company. Little known about them but thought Bowman Foster Inc produced this line. Many of their lines had the earrings signed only and the brooches unsigned.  Ben Reig - 1950s - 1970s, an early designer was Omar Kiam. Quite rare to find their jewellery. Bengal Jacob - 1873 - present, Idar Oberstein, Germany. Famous for their Art Deco jewellery. Produced prolifically many different pieces. Exported worldwide including Woolworths in the UK. Galilaith and chrome were used. Unsigned. The company was closed during World War Two, one of the sons never returned as reported missing. Flourished in the 1950s and 1960s. Not marked jewellery maybe a sticker. Most went wholesale to a retailer who would have sold it under their own name.             Berebi Edgar - New York company. The Berberi company started to produce jewellery in the early 1980s, with epoxy marbled earrings being their most produced as well as necklaces, bracelets and brooches. In the 2000s, this company changed direction completely and stopped producing jewellery and now make high-end homeware and accessories such as mirrors, trinket boxes, picture frames and much more. The signature includes engraved ©Berberi with the accents over the e's. Their early jewellery is unmarked and they used cards and paper stickers. Collectable earrings and other jewellery.

BJ - Unknown manufacturer  - would suggest imported from China during the eighties and nineties. Seemed to have produced a wide range of jewellery from the whimsical, animal, cameo and floral. In brooches and necklaces.


BillyBoy - Born in 1960 in Vienna and founded Surreal Couture and then Surreal Bijoux on the Rue De La Paix, Paris. BillyBoy created surreal jewellery for Thierry Mugler and Charles Jourdan. Collects haute couture dresses and Barbie dolls, writing a book in the late 1980s. Boden Niki - 1990s - today, a German designer who is known for her fabulous mythical beasts, unusual designs and brilliant colours in necklaces, brooches, earrings and bracelets amongst many other decorative goods. Bogoff - A husband (Henry Bogoff) and wife team that founded "Jewels by Bogoff" in Chicago. Produced high-quality fake jewellery in the 1940s and 1950s. Then 1946 to 1960s when the company closed after Henry's death. All the rhinestones were glued into place by hand. Necklaces, earrings, bracelets and brooches including matching jewellery sets were produced by them. Also pendant necklaces, imitation pearl necklaces and earring wraps. Signed © BOGOFF. Boucher - 1937 - 1971, Marcel Boucher founded the US company. Jewellery marked Boucher or MB with the Phrygian cap. Marcel died in 1965, his wife Sandra ran the company after.

Brev - another name for patent or the ownership/copyright in Italian. Short for Brevetto.
Brown A R - English pewter company that is based still in the UK. AR Brown produce pewter pins sculptured in animal and bird forms. Very detailed jewellery pins that are signed on the reverse. Great little collectables. 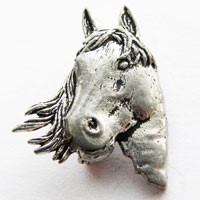 Brown T S - Associated with A R Brown in that this company was started by his son. Also producing fine pewter pins but aimed at the country sportsman. Includes fishing, hunting and sports pins. Also, produce keyrings and pewter sculptures. Started in 1986 and uses high-quality English pewter.

BSK - US, New York company in production from 1948 to 1983 approximately. Produced good quality jewellery which was originally sold in Woolworths and other department stores. Rising in price due to their enamel work which was very good. Also produced a range for the film "My Fair Lady" which are now very sought after. Signed BSK with the © symbol. The My Fair Lady pieces are signed as such as well as the designer. BSK stands for Benny Steinberg, Slovitt, Kaslo who were the founders of the company.
Butler and  Wilson - 1960s to today. It was in the sixties that the two men met in London. Simon Wilson born in Glasgow had previously trained as a hairdresser, he had been told of another man who looked just like his twin! Meeting Nicky Butler the similarities were in looks, both had blond long hair and both skinny. But their personalities were very different. The two teamed up and started to sell antique and vintage pieces from a market stall along the Portobello road. Specializing in Art Deco and Art Nouveau pieces. Soon in the late sixties, they were using parts of jewellery that were both antique and vintage in their own designs. In 1972 they moved to their first shop in Fulham Road in London and continued to design their own range of jewellery. The eighties with the fashion for large statement pieces allowed Wilson and Butler to expand further. A large 6-foot billboard of Catherine Deneuve, displayed outside their shop, set the trend for other celebrates to appear being paid with jewellery from the designers. Amongst the celebrates that wear Butler and Wilson are Kate Moss, Sharon Stone, Dame Edna Everage, Jerry Hall and Faye Dunaway. Princess Diana was also a big fan, often dropping into the shop with a single bodyguard to make her choice. In the mid-eighties, Simon Wilson took over the business when Nicky Butler went to America. They found that they wanted different directions. Nicky wanted to expand and live in the US, whereas Simon wanted to stay in London. So the famous team parted. Nicky now designs silver and gemstone items, very distinctive and very recognizable with its influences taken from antique museum collections and Indian jewellery. He lasciviously uses multiple and oversized stones. Like Simon, Nicky has sold through television shopping channels (HSN) and still retains a consultancy role in the Wilson and Butler Company to this day. The recession in the nineties hit Wilson and Butler hard, forced to close their shop in Glasgow brought home the importance of diversification within a business. So the nineties saw the company add a unique range of bags, shoes and accessories and in the early part of this century, they added a collection of jewellery made from semi-precious stones. Further expansion in 1994 has seen Butler and Wilson selling their distinctive glitzy jewellery and their flamboyant accessories on the shopping channel QVC. In 2007 the men's range was introduced and recently beautiful vintage-inspired clothing. Along with selling their items on QVC, Wilson and Butler have a website and three shops. Two in London at Chelsea and Mayfair with a third in Monte Carlo. Their limited production of items allows the jewellery and other products to be potentially very collectable. Their early ranges from the seventies and eighties are sought by many collectors worldwide. Two books have been produced: Rough Diamonds The Butler and Wilson Collection in April 1994 by Vivienne Becker. Now out of print but copies are still available in second-hand book shops and on the Internet. Butler and Wilson 40 Years published July 2009 by Simon Wilson and Madeline Marsh. A special edition with a jewel-encrusted cover is also available. Produced to celebrate 40 years in business; each book donates a percentage to Breast Cancer Care. Why because their shop in Fulham road was next to one of the largest cancer units. Women who had been diagnosed or attending for treatment would drop into the shop and buy a piece of jewellery to cheer themselves up. You may also be lucky to source one of their catalogue produced over the years on the Internet, but they now command high prices. Butler and Wilson are marked B & W. Simon Wilson is a workaholic, enjoying a simple life in London. He still loves antique markets and has never attended a jewellery course in his life. Butler and Wilson is very collectable and now commands high prices for many ranges.